In this time’s blog about Marathi relations, we are looking at family mainly on the paternal side. If you missed it, take a look at our last blog about maternal family relations.

Aazobaa is your granddad from either side of the family.
Use it as: Name + Aazobaa

Aajee is your grandmom from either side of the family.
Use it as: Name + Aajee

Your father’ sister, regardless of her age, is your aatyaa.
Use it as: Name + Aattyaa
As in, Mee Sonal Aattyaa kaḏey geley hotey

Just like the first cousins on your mom’s side, first cousins on your father’s side have specific relation names. Refer to your cousin brother as aattey bhaaoo and a cousin sister as aattey baheeṉ. If they are older than you, call them daadaa and taaee respectively.
Use it as: You won’t use these while talking to them, only when referring to them when you’re talking to someone else.
As in, tee maajhee aattey baheeṉ aahey

Your father’s brother is the original Kaakaa. Use it to refer to both, your dad’s younger and older brothers.
Use it as: Name + Kaakaa 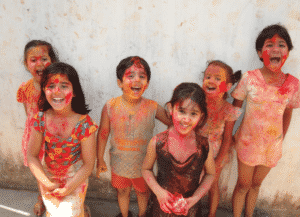 For new learners, these Marathi relations can get a little confusing to use. At Speak Marathi, we work on teaching the cultural aspects of the language along with regular grammar and vocabulary. The result? Our students learn to use words like this—and more—to improve their spoken skills!

Register for a free demo session with us